One issue, two people and a three-minute conversation – a concept proving you don’t need hours to get to the things that really matter. Three brief discussions about propositions on diversity at Leiden University. 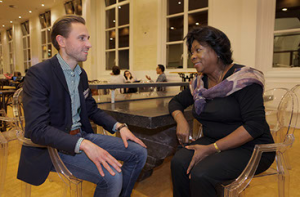 Virma: “It’s an interesting thought. I think that once in a while you need to do something drastic to keep an organisation moving in the right direction, but at the same time it can be difficult for the women appointed. I’m afraid that if you introduce gender quotas people will assume the female leaders or professors are in their positions “just” because of their gender. I have worked in the corporate world and know what it’s like to be the only black woman in a world of white men. It puts you under a lot of pressure, because you feel the need to work extra hard to prove yourself.”

Michiel: “I agree, it would only work if the leadership is fully on board. They need to embrace the quota system and keep explaining to the organisation and to each other why there is an urgent need for diversity.”

Virma: “You should only introduce gender quotas if your organisation is ready. It should go without saying that every single person is hired for his or her qualities, and not on the basis of gender.”

Michiel: “I agree with you about an organisation having to be ready, but do we have time to wait for that to happen? How do we get to an ideal situation where everybody sees the need for diversity in their organisation? Maybe you have to break the status quo by taking drastic measures like introducing gender quotas, just to shake things up and start with a clean slate.”